Kept in a prison where their fate is the worst they could ever imagine.

For many years Cindi the founder of Rushton dog rescue, knew of the dog and cat meat trade happening in Asia, she vowed that one day she would stand up and rescue some dogs and bring them to safety, we needed some experience in the rescue world before we took on rescuing dogs from one of the most abusive countries in the world. Then it took us to 2017.. where we set out to save 5 dogs, well that number did not last long when we were faced with the truth of what happens to the dogs and cats (plus lots of other animals) in the country of China.

When that plane landed for the first time and we stepped out into the country of China it soon became clear that it was a far bigger issue than we first ever realised. Dogs are being slaughtered for their meat, fur, bones, limbs anything they deem they can use for their own human consumption. All breeds of dogs, mixes big, small, young, old, These dogs are killed in the most inhumane way you can ever imagine, there are zero animal welfare laws in China so how do they stand any chance at all of ever being truly safe.

Most people were made to think that the killing of mans best friend happened once a year at a “festival” named Yulin, which takes place every June at the beginning of summer solstice. During this time thousands of civilians gather to celebrate by bringing thousands and thousands of defenceless dogs and cats into the market to kill and consume them, again this is done in horrific tortures ways. Unfortunately Yulin isn’t the only time our friends are killed for their bodies. It happens every single day, every minute, every second. 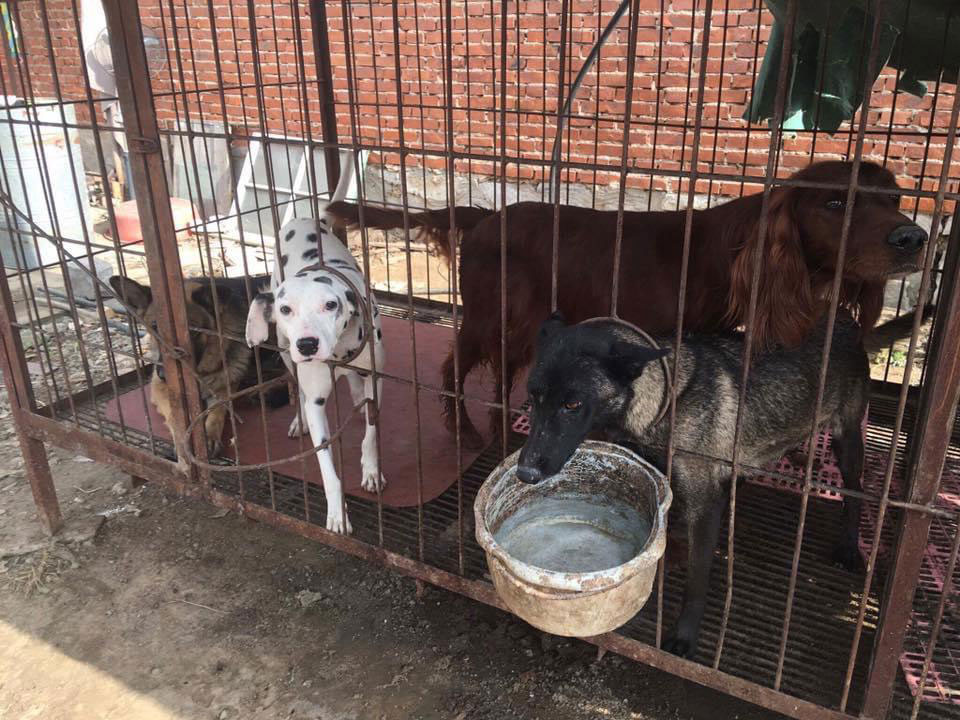 Before the dogs are taken to markets and slaughter houses to be killed they are kept in absolute horrendous conditions. Locked up in cages all crammed in together, thrown into prison like cells waiting for that person to come in and end their life, static in complete fear.
They are transported in trucks, where wire shallow cages are used to contain the dog , during this time many dogs break bones, die in transit, suffer more than you could ever imagine, Then they are taken to be murdered at the hands of evil. We ourselves were involved in a truck intervention on one of our rescue missions and it’s worse than you could ever dare to imagine.

For the lucky ones some trucks are spotted by the brave Chinese animal activists who sometimes manage to liberate the dogs but even then the dogs do not always survive as they can be severely ill with the treatment they have had to endure. The dogs that end up in this trade will either be, strays that are captured, pets that have been stolen, dogs that have purposely been bred in a dog meat farm, ex breeding dogs and literally any dog they can get their murderous hands on. No dog is truly safe in China. How can they be when there is zero laws to protect them.

It is really important to remember though that not all Chinese citizens can be tarred with the same brush, the Chinese have the most bravest animal activists in the world who put their lives on the line daily to save lives. We work with some amazing people out there who hate what happens in their country. The population of animals and people is so great that there is never a equal balance of good and evil. 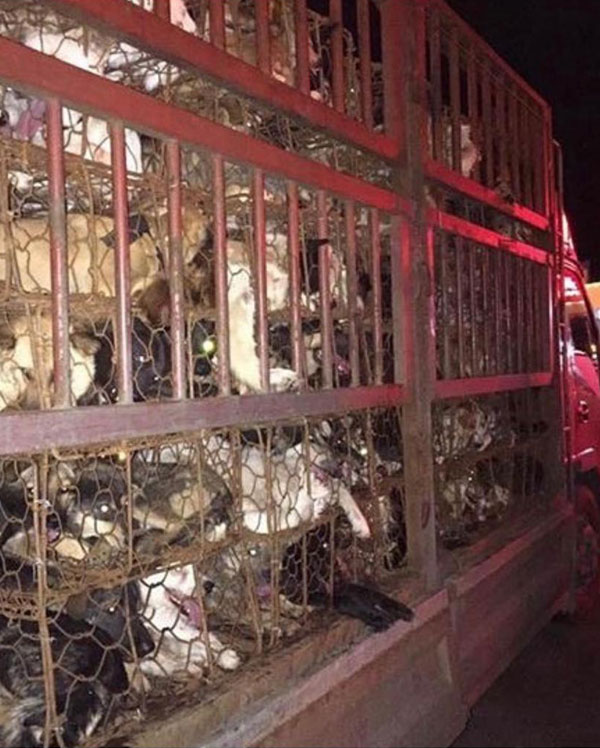 Once we rescue a dog in China we get him/her straight to a veterinary clinic so we can determine what extent of damage has been caused, get them any treatment they need and hope they survive. Once that is done we move them to our boarding facility where they start the lengthy costly process of getting ready to get out of China. They undergo their quarantine in the boarding with numerous trips to vets to get bloods taken, rabies injection and absolutely everything they need to legally leave China. We are incredibly thorough in this process and everything is done above board and legally as it rightly should be.

Ourselves Cindi and Zoe have made many many trips to China to rescue as many dogs as we can, we have seen everything first hand with these dogs and it’s honestly just horrific. In China they do have shelters however the majority of these “safe shelters” are absolutely over run, poverty stricken places. Thousands of dogs piled up with no real food or clean water, some we’ve been to don’t even have a roof! They breed In there which makes the situation 100% worse, disease is spread and so so many die. We have rescued hundreds from shelters but it’s never enough.

The streets in China are just as dangerous for dogs as the meat markets and slaughter houses. There have been so many victims of street abuse where they are caught by a passerby who just tortures them for their own gratification. We’ve saved dogs from the streets who have had limbs cut off and facial impairments. If a dog is out on the streets they are also in danger of being caught to be taken into the meat trade. 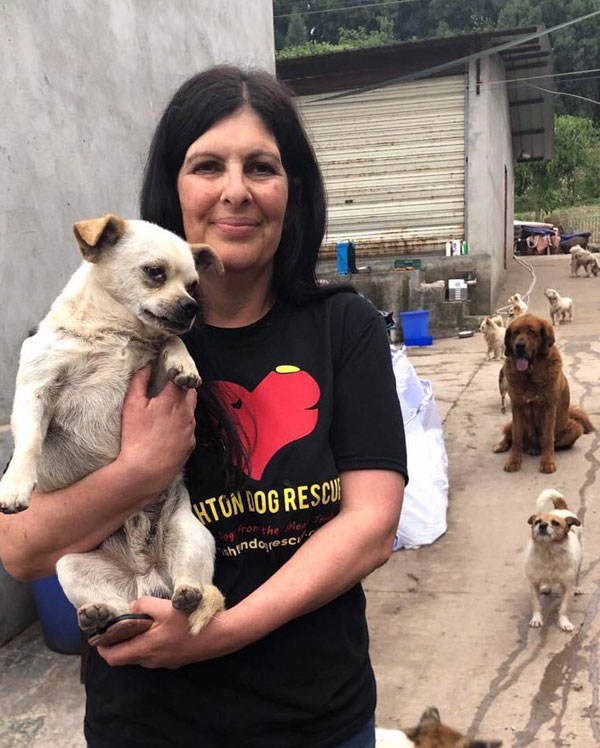 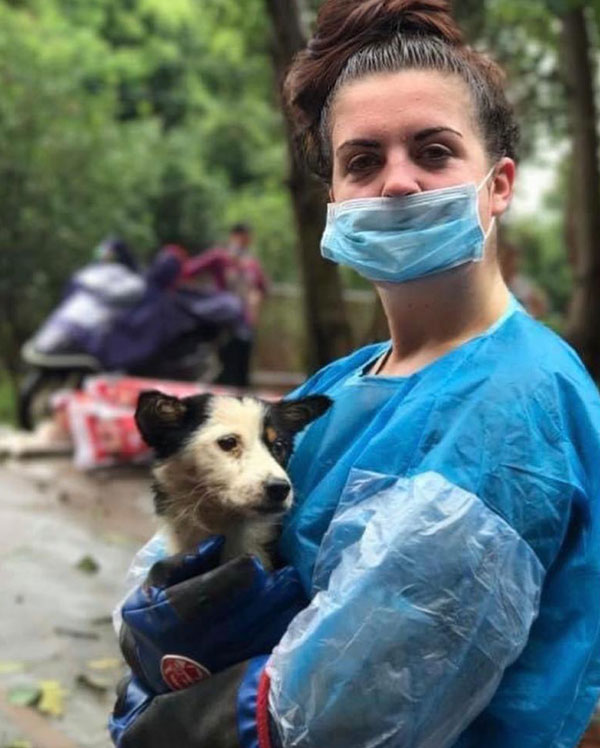 We have rescued and moved hundreds and hundreds of dogs out of China since we began our darkness to light mission, it has changed our lives and outlook on life so much, we work tirelessly to fight for these dogs but we wouldn’t change that as it has beneficially changed the lives of our friends so much more. I honestly don’t think we will ever be able to stop helping the Chinese survivors. After what we have seen and heard them go through how could we ever walk away from them. They have our hearts.

If you’re thinking about enquiring to adopt one of our Chinese survivors then don’t delay- do it today! They are absolute hero’s and you will be honoured to have one if you’re home.